The area of the Moonsea is a true treasure-trove of resources, its southern and western coast lands are rich in raw resources and game, its mountains are full of ore and minerals, and the seas filled with fish and crustaceans. The skies over the waters have turned into a foul black cloud of smoke, while small poisonous pools are littered all over the wilderness in the Moonsea region.

The Moonsea region is also known as the "Sea of Dragons", and dragon lairs exists both in the mountains, as well as in the depths of the lake.

You have traveled to Elmwood, a small farming community located on the southern shores of the Moonsea, where the druid Ezril Treewarder has called out for brave adventures, to explore the nearby ruins. The main goal is to find information regarding the disturbing weather changes in the Moonsea region. Ezril Treewarder is tending to a shrine south of Elmwood which is dedicated to Eldath, the Green Goddess, and Mother of the Waters.

The village itself is home to woodcutters and fishermen, and is a waystop for ships and adventurers passing by. Elmwood is neutral and the people there keep to themselves, protected both by their isolation and the fact that there is little worth taking by force. But lately more and more sinister travellers have made their brief stops in the quiet village, before continuing their travels towards the nearby Ironfang Keep.

You arrive at the tavern Still Waters, a tavern known for some of the finest amber ale in the whole region - and as you enter the warm tavern - the owner Enrad Daleborn greets you with a big smile....

Upon arriving at the Still Water tavern, Akron the Tiefling Druid talks to the owner Enrad Daleborn, while ordering an ale. Enrad has some interesting things to tell, but information does not come cheap, and he requires 5 gold pieces (gp), for his information.

Akron is not wealthy, so has to decline, but before he declines, another character, Trail the Tabaxi Rogue and aspiring stealer of things, throws down 5gp infront of Enrad, both making a new friend, and obtaining some new information.

Lesym Bardye the town crier was rumoured to have been killed by ghouls in the hills outside town.

The two newly formed friends does not notice it yet, but a nearby stranger has been listening, and has moved closer to the conversation. That stranger is Dif, the Aarakocra Monk, a young aarakocra on his own quest to remove the curse of the Moonsea region, so he can fly freely in the clear skies.

Another large person, slightly intimidating, smells adventure, and yells out, "Hello new friends, can i join you on this quest for glory?!", this person is ofcourse Kann, the Goliath Barbarian, whom with his almost 3 meters, is a large goliath. Kann is fond of dwarves, and will protect them at all costs. Kann is also on his own quest, to find the murderers who killed his friends not long ago... vengeance is on his mind.

This odd mix of races, quickly become friendly towards eachother, not friends yet, but friendly. They are all interested in what rewards there is for finding Lesym the town crier... but Enrod leads them to Dali the local Blacksmith, which is the one calling out for adventures to find his best friend Lesym.

Before the party leaves, Enrod tells them he has some more information regarding Dali, which they can have for 1gp... Trail quickly throws down another gp, as if money is no issue for him, and Enrod then tells them this new information.

Duli the blacksmith lost all his gold gambling at The Laughing Trickster.

- Which they might keep in mind, when talking about rewards with Dali... maybe remember to get gold upfront. The party thanks him, and quickly make their way towards the blacksmith, on the other side of the small road.

Before the party enters the blacksmiths house, they spot a dwarf outside working on the anvil. It is the Janrath Ironforge, a sturdy fighter wearing a chain mail and carrying 2 sharp hand axes. Kann which adores dwarves, begins chatting with Janrath, and ask him if he wishes to join them on a great adventure. Janrath does not say no to helping a dwarf, in this case the blacksmith, and decides to travel along the odd group, making it even more odd.

The party enters the blacksmith, and talks to Duli... they talk back and forth about Lesym, and tries to get some more information about his whereabouts, but Duli does not know much. The only thing he knows is that Lesym was last seen east / south east of town. Trail pokes Duii about the potentiel rewards, and are told they will receive multiple magic items, if they return with Lesym or at least information about what has happened to him. Trail asks if they can get some gold upfront, but Duli explains that the magic items are very valuable and should be reward enough. This does not make the party happy, and they decide to move south first, towards the shrine where the druid Ezril Treewarder lives. The quest for the town crier can wait.

After a short trip back to the tavern to resupply, they decide to rest outside town and save some money. Kann is invited to sleep in the barn next to the tavern, and he accepts that generous offer. 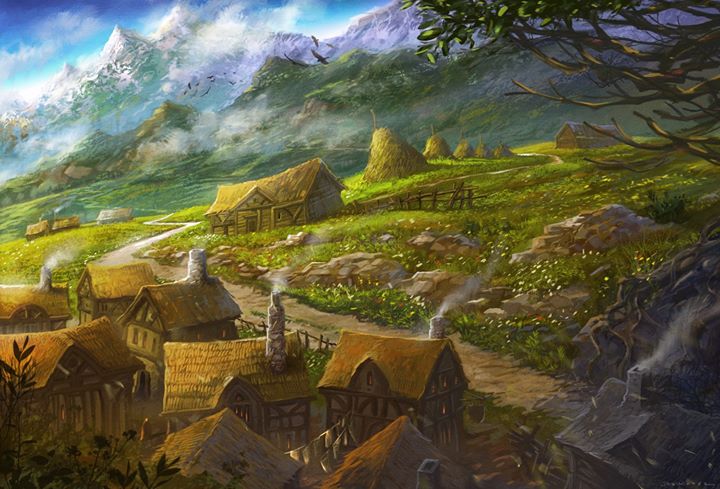 The party sleeping in the forests nearby Elmwood wakes up after a nice sleep. Kann on the other hand, wakes up to his javelins missing from his inventory... stolen! The giant is obviously mad, and wants to hunt down the thieves that have stolen his javelins.

When the party meets up shortly after, they learn about the problem, and decide to question the innkeeper about it. Enrad says the city has had problems with thieves lately, and some dark types have been noticed running south of Elmwood, if they would like to check it out. The party is allready heading south, so they decide to keep an eye out for shady characters and Kann's javelins.

While traveling south Dif spots a group of kobolds resting near a campfire, and the party decide to test their fighting skills while rid the world of these "obviously evil creatures". The kobolds are quickly disposed of, and the party continues south into the Elmwood Hills.

A half days journey later, they reach the Elmwood Hills, and the party uses a couple of hours exploring the nearby area. Janrath spots a big natural like chimney going down into a big hill, Akron notices a large western entrance into the same hill and Dif also discovers an entrance into these hills, coming from the eastern side, where a river leads into the hill. While the 3 tries to decide what entrance to take, or if they should enter this hill at all, Kann returns telling them there is a large cave like entrance south of the large hill around 20 feet high... everyone decides to enter through that side, and head towards the southern side.

It is late, so before venturing inside the large cave beneath the hill, the party decides to rest through the night, while taking turns keeping an eye out for danger. 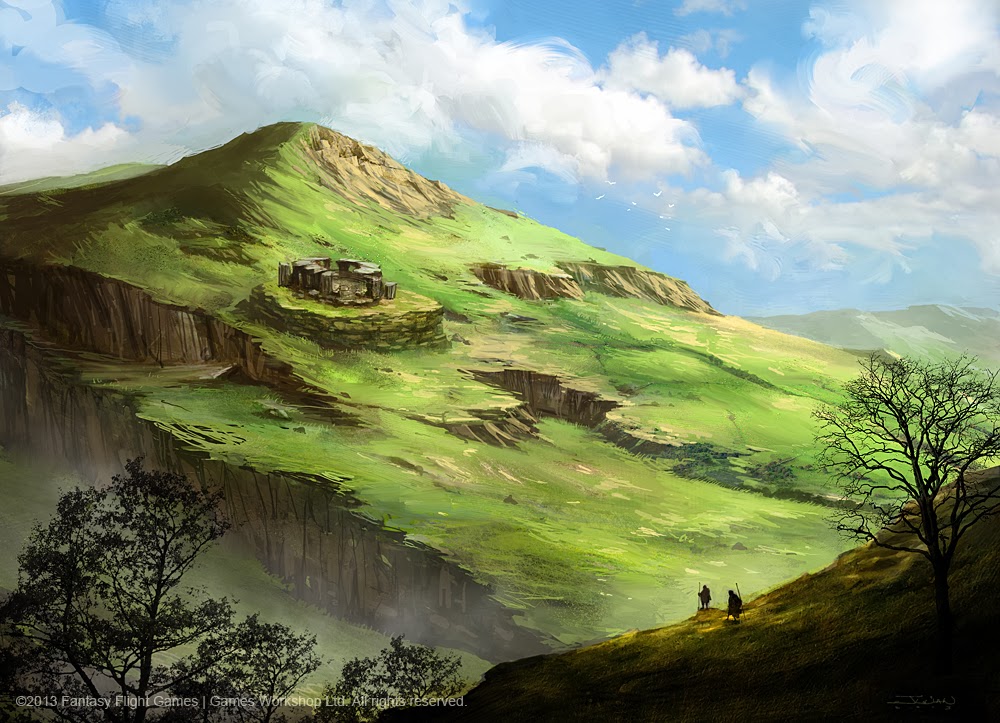 The party wakes up early, craving for adventure, with their eyes set on the mysterous caves underneath the large hill. They eat a quick breakfast, and begin exploring. Trail - being a sneaky type - goes inside and scouts for danger. He discovers several broken weapons near the entrance - including javelins - which Kann immediately takes as a sign, that the thieves which stole his javelins are inside!

After 30-40 feet or so, the cave expands into a much larger cave, which is dark but not completely black. Darkvision is a welcome feat to have here though. Trail notices a huge giant ogre bathing in a large natural pool of mud, the ogre is half asleep, and seems to have let his guards down completely.

He hurries back to the party, and while talking, Janrath makes a comment that they should be careful, they do not know what else lurks in the dark. Dif is not a fan of ceilings, so if killing an Ogre is the fastest way out, so be it, Kann and Akron agrees to taking on the large Ogre... and so the party attacks.

The (short) battle of the Elmwood Hill Caves

Trail sneaks up the the ogre, tries to backstab with throwing daggers, but misses completely! The Ogre screams a horrifying scream when the dagger flies right past his left ear. Before the party can respond, the sound of drums can be heard, and arrows start flying past them. Goblins! The Ogre is not alone...

The battle is difficult, the Goblins are above them on ledges, spread out and firing arrows. The Ogre hits like a truck, and Trail is badly hurt... after what seems to be a minute only, a killing blow is send towards Trail, but suddenly his skin turns to stone, and the blow leaves him unharmed. A bright light from the center of the cave room emits, and Ezril shows himself... a blessed sight, for the party... the goblins and the ogre quickly flees deeper into the caves. The party is saved, only with their pride slightly hurt.

Ezril is surprised they decided to attack such a strong Ogre in this hostile area. Advices them to come visit him at once, he has urgent matters to discuss with the, but they cannot do it here. He lives a short journey south, at the druid shrine.

He vanishes... and the party scurries outside. Running far away from the caves, and then resting to heal their wounds. The bitter taste of defeat... a taste they do not wish to experience again. Lesson learned. 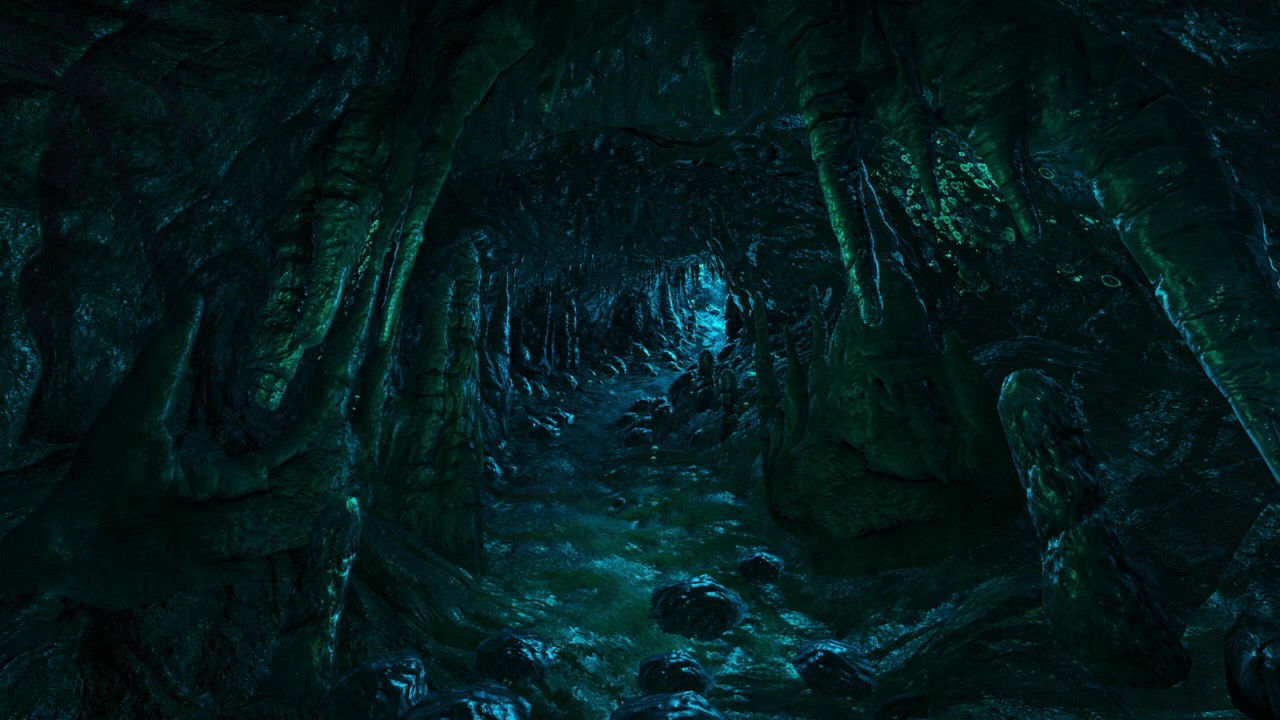 Travel to Ezril, animal handling, talk to squirrel leads party to Ezril.
Talks, rumors & quests, come back later when stronger, solve some quests. Ezril says he heard Lesym was killed Ghouls near the Elmwood Graveyards which is located roughly southeast of Elmwood.

Party heads back to town, Akron sells a fake magic mirror to Brede the local merchant. Brede wants the party to retreive his family heirloom from a rival in the large trading city Hillsfar west of Elmwood, past the Swamp of Sorrow. The party notes this, but decides to try and find Lesym first, and heads towards the Elmwood Graveyards.

This eerie graveyard is truly disturbing, and the party senses a great evil here. Battle vs skeletons and zombies when entering the fenced area. 3 crypts, which they search for clues, secret door is found, they descent into a dark moist dungeon.

There is a big fight vs a Ghost, which ages the party and Dif in particularly. The party survives but Dif is badly hurt, and decides to fly towards Ezril to be healed. The rest of the party quietly explore the dungeon, and discover a huge pit of bones, where a bone devil is trapped.

Kann gives the bone devil a gift in the form of his selfmade bone necklace, made from corpses of slain foes. The bone devil takes this gift, and hugs it while letting the party go by, unharmed. The party search a dusty library before heading back to entrance, they decide to rest while waiting for Dif to return.

Battle vs Lesym, summons ghouls, teleports, turns invisible... party in trouble, bone devil turns up behind Kann, helps the party defeat Lesym and undeads... Lesym escapes though, and the fight is won. The bone devil angrily runs away after Kann gives him some bloody ghoul remains.